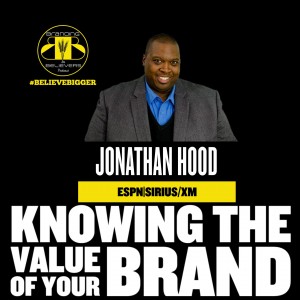 Imagine, after 10 years of pursuing your dream, getting hired under the biggest brand name in your industry. Now imagine walking away from it a short while later, to pursue a promising opportunity that turned out to be a front for a criminal enterprise.

Out of work, and drawing unemployment for three months, Jonathan Hood, bet on himself, and walked back into the offices of ESPN to request a second chance. More than a decade later, he’s a highly regarded sports journalist with a listening audience that spans from coast to coast on SIRIUS/XM radio and a sportscaster in one of the largest sports markets in the country.

In this episode, Jonathan Hood shares powerful lessons about knowing your worth, second chances, and the privilege of getting paid to do what you love.